Rumbling down Central, alongside the blossoming trees, come two red tractors. As they pass, you can read “El Agua es la Vida” on bright blue posters. Their machines sputter, leading the chants of 200 voices: “El Agua es la Vida.” The sun is out, the sky is blue, and there’s a happiness through solidarity. A beautiful painting of la Virgen de Guadalupe, and next to her, in script: “El agua no se vende, el agua se defiende.” The megaphones, the car honks echoing, the rhythmic sound of photographer’s feet as they run ahead to get the best shot. Yellow signs and vests are splatters of color against the clay-colored concrete. Block by block, to Civic Plaza. El Agua es la Vida.

Once we arrive to Civic Plaza, the tractors must turn the other way with a final fist pump and a smile, and we begin to pile up our posters in a multicolored stack. There it begins – the funneling into the Vincent E. Griego Chambers for the Bernalillo County Commissioners Special Zoning Meeting, to debate the Santolina Master Plan. There aren’t enough seats for us all. They open up the overflow room, where there’s a TV with a live stream. 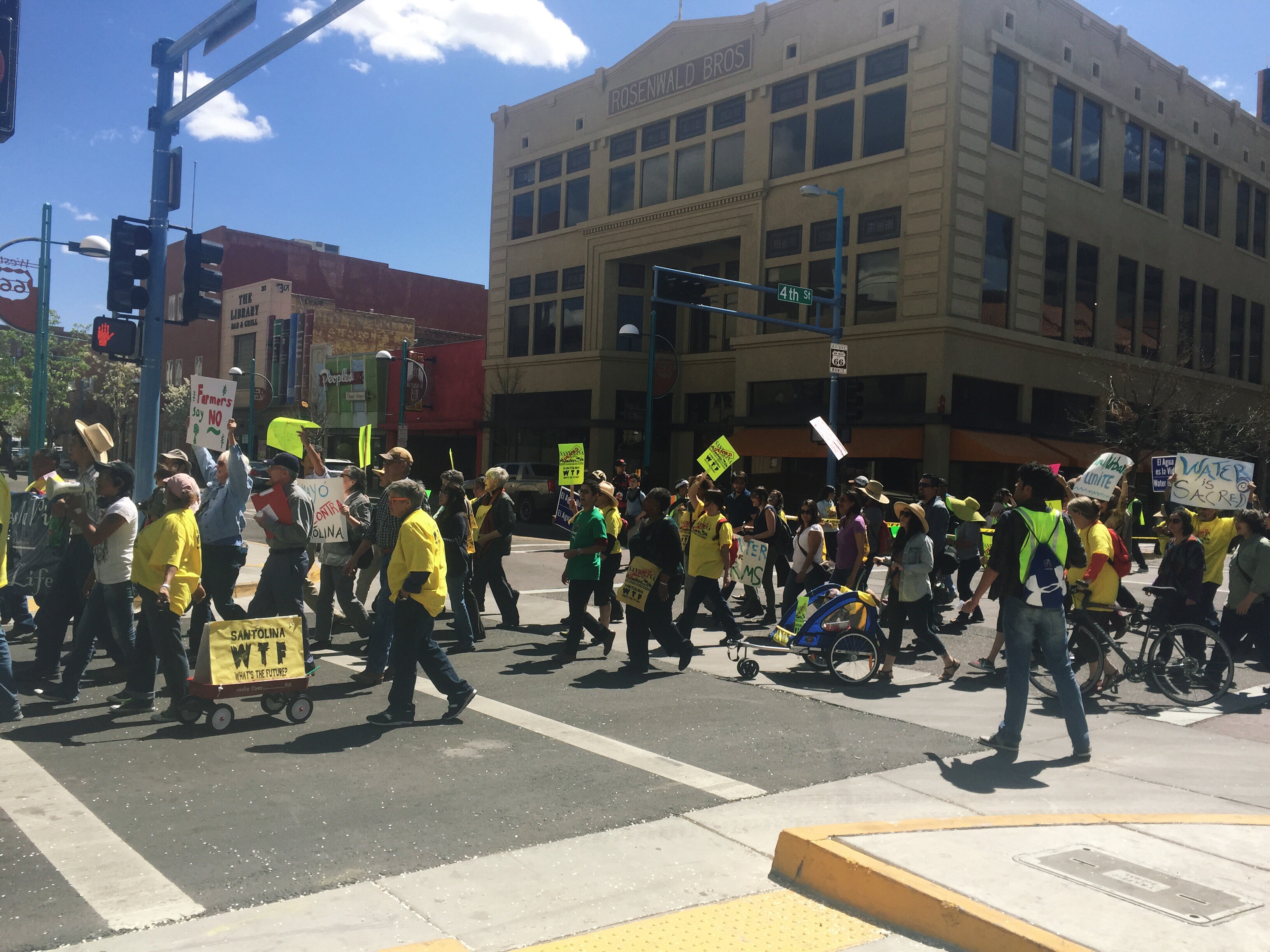 There’s something stale about the Chambers, bitter and forewarning. There’s this unmistakable feeling of authority as the Commissioners remind the attendees that we aren’t to be disruptive (but that they know that we won’t be.) Even though I had been following the Santolina development and was antsy with anticipation, I quickly realized this meeting was not going to fulfill my hopes. Indeed, it was two, three hours of attorneys and city officials, asking questions and explaining graphs. Time was stalled. Biases were apparent.

Vice Chair, Art De La Cruz, had made his approval of the Santolina Master plan evident in an Op-Ed in the Albuquerque Journal, prior to the public hearing. As a Commissioner, this opinion absolutely gets in the way of his objectivity, despite his confidence that he can. It blatantly expresses that his decision has already been made prior to even listening to the public he is designated to represent. However, no other Commissioner objects that he is excluded from the decision.

The decision about Santolina is vital to our community, whether we choose to preserve the beauty we’ve already got or whether we risk stretching ourselves across more land. With drought, poverty, hunger, violence, and a lack of resources – why are we looking to create another half-finished development similar to Mesa del Sol? Even APS, who was a previous supporter, decided unanimously to deny the plan and focus on finding financial stability first.

Despite every seat being filled with eager speakers and advocates, public comment is strategically pushed further and further out, until eventually, rescheduled for the next morning. It becomes an oppression of time, space, and voice. Disrespected, in a room built to separate our politicians from us –  us, laughing and hugging, just hours earlier, now confined to seats and silent, patient. It’s a waiting game but we will wait. We will do what is necessary to protect our land, our water, and our culture – no matter how inconvenient and falsely transparent these hearings may be.

The next morning, dozens return to speak about the countless concerns there are about the new development. There was not one person from Bernalillo that came to support Santolina. Due to this, the 11 hours of testimony, the decision is postponed until May 11th. The money may not have been on our side, or even our Commission. But we had the heart and perseverance. Our voices will hold steady. We have the vivid dreams about bright futures, and we don’t need millions. We just need our agua, our sand, our sun.