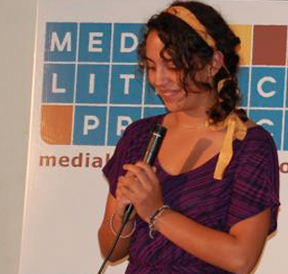 Luna Olavarría Gallegos is a Boricua + Chicana multi-media producer, journalist, and organizer. Luna joined Generation Justice at the beginning of 2010 as a Youth Radio Producer, where she has developed as a media-maker, producing radio shows, blogs, videos, and vlogs.

Her time at Generation Justice crafted her writing and production style, which is based in telling communities stories of love and resistance, and highlighting individuals and movements that often go unrecognized.

Although born in raised in Albuquerque, Luna is currently based in New York City and has written several published articles in the Fader, Remezcla, the Guardian, Truthout, and ReadContra.