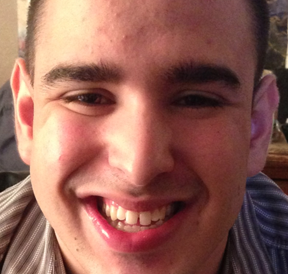 Victor Torres is 24 years old and is currently attending the University of New Mexico where he majors in Sociology and is also planning to attend law school in the near future . Victor was diagnosed with Cerebral Palsy when he was 2 years old. He was raised in a loving home with his Mother and younger sister Jasmine, and now lives with his partner Nick. Living differently abled has had its hard ships. At thirteen, Victor took legal action against the Albuquerque Public School district in order insure that he received an equitable education that included getting his accommodations and modification needs met. This was a daunting and intimidating process but after perse- verance, Victor received a more quality education. As a result of his courage, changes in procedures were made in the school district for other differently abled students. He went on to graduate from the Media Arts Collaborative High School ( MACCS) in 2011.

Victor joined Generation Justice as a MACCS Intern during his Junior Year. He was assigned to be a Blogging Assistant but quickly moved to broadcasting radio programs and video interviews. While being part of Generation Justice, Victor has had many amazing opportunities including interviewing Dolores Huerta and Senator Martin Heinrich. He has also appeared on NM PBS Public Square to discuss the complexities of the Drop Out issue and talked about the value of training youth on early brain development. Victor’s story was broadcasted on Generation Justice and then was showcased nationally. Victor also delivered the keynote address at the Organizing Youth Engagement Conference in 2013. Working with Generation Justice has helped Victor become more of an activist, helping him not only realize his own voice but also finding ways for other youth to be heard.

Even with the many daily struggles of getting to school, getting accommodations at UNM, exploring his independence as a young man, Victor continues to be open minded, strong willed and focused on a bright future. Some of his favorite things to do are spending time with his family and friends, reading, exploring the internet and watching TV. Victor enjoys teaching others and his passion is advocating for people with disabilities and the LGBTQ Community.