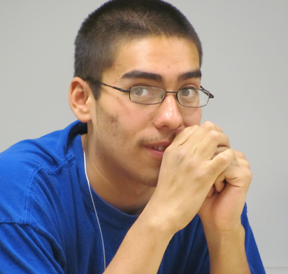 Alex is one fourth Cochiti, and the rest Hispanic. He has lived in Albuquerque, New Mexico all his life, though he would like to call it Albucrazy. He doesn’t know much about heritage, all he knows is that he’s native to the graceful, Land of Enchantment. He joined Generation Justice in the hopes of comprehending social justice a little more. Also, he likes the fact Generation Justice is intentional about being multicultural, encouraging a diverse atmosphere.

Alex likes to hang out with his friends and free flow to instrumentals. He likes to play basketball, video games, and rap. He has a voracious ambition to be an audio producer. He wants to have his own studio, after he serves his duty as a Marine. Lastly, Alex has a high expectation to own his own home with one day having children, living life strife free.