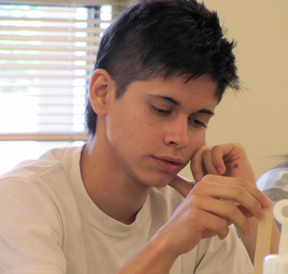 Adam J. Valdez was born and raised in Albuquerque, New Mexico.He is fifteen, loud, jovial, comical, and very outgoing. He joined Generation Justice in May 2011 because he wanted to meet new people, try something new, and most of all learn new things. Last year, he was in an improv club called The Box, which started to strike up other interests like acting and producing.As for hobbies, he loves to try new things, he’s quite the curious cat so new hobbies come and go. He’s tried painting, building, cooking, drawing, piano, gardening, and much more. There’s only a select few that he’s stayed with such as guitar. He’s been playing for three years and is self-taught. He writes his own music, cover others, now if only he could sing!Adam also writes stories. Fiction is his strong point, and he’s already written a two hundred and fifty-page book, which he would like to get published soon! And if Adam is not writing or playing guitar, he’s out in the pitch playing a game of soccer. The first and only sport I’ve played. Why? Because there’s just nothing like it. His hopes and dreams for the future is to become something memorable. Whether it be an author, an actor, or just a plain old man, he would like for people to know my name.He plans on following his dream of becoming an actor. He thinks he could do best at comedy. Perhaps the second coming of Jim Carrey? Or maybe an author so he could share his imagination with the world.That’s just a little bit of Adam, and he’s excited to see what kind of memories he can make here at Generation Justice. “Thanks.” (: