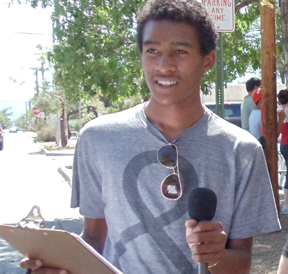 “Swag, my government name is Keoni Edward Baty the first (no descendants).” Keoni regards himself as an intellectual and a creative individual, witty at times though quite during others. He is a swaged out individual, where swag is the exclamation point of all his sentences.He is currently attending Volcano Vista High School as an incoming. He enjoys track and field on a competitive level in both high school and club affiliations. He also enjoys long boarding, writing music, and having outrageous adventures with like minded individuals. His father is black, Native American, and Irish, while his mother is Chinese, Hawaiian, and black.Keoni is a nondenominational Christian and attends the church of Christ. He is a former member of the national society of black engineers (NESBE), urban Daoism, the movement. Though He has many ideals he would consider his belief in God as the strongest. He also believe strongly in the concept of the spirals and its reoccurrence in life as an important theme (evolution, growth, degredation). Keoni decided to join Generation Justice as a way to enhance my writing and social skills.His dreams for the future are to be happy. He wants to live outside of the norm yet maintain moral values. Keoni would also like to be educated in various fields, learn philosophy, and go surfing